The Mennonite Settlement of Manitoba 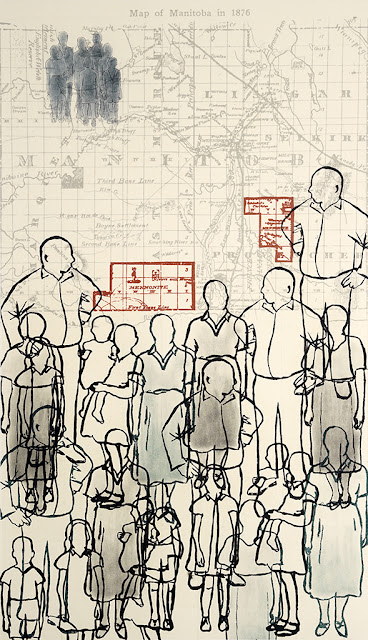 'A Dream that is not all a dream'

Part of my family's history has always been the migration of Mennonites from Russia, or modern day Ukraine, to Manitoba, before migrating further to Paraguay. I took my family's link to Manitoba as the starting point for my research into the settlement history of the province.

The Daily Free Press, reports on August 1, 1874 reports, “The first instalment of the Mennonites, consisting of sixty-five families or three hundred and eighty persons arrived last evening by the International ... The individuals composing the party seem to be composed of exactly the RIGHT SORT OF STUFF, physically, for pioneer life, and this taken in connection with the well-known frugal habits and thriftiness of the Germans, ensure their prosperity here … we may congratulate ourselves upon so valuable an acquisition to our population.”

While my maternal great great great grandparents were not on that very first ship that arrived in Winnipeg, they were part of the subsequent groups that arrived between 1874 – 1877 and I imagine the situation and sentiments towards them would have been similar.

Manitoba Daily Free Press 3 years later on October 1, 1877: A Viceregal Visit - Trip to the Mennonites  “... [S]eldom have I [Lord Dufferin] beheld any spectacle more pregnant with prophecy, more fraught with promise of an astonishing future than the Mennonite settlement ... When I visited these interesting people they had been only two years in the Province, and yet in a long ride I took across the prairies which but yesterday was absolutely bare, desolate, and untenanted, and the home of the wolf, the badger, and the eagle, I passed village after village, homestead after homestead furnished with all the conveniences and incidents of European comfort and a scientific agriculture, while on either side of the road cornfields already ripe for harvest, and pastures populous with herds of cattle, stretched away to the horizon.”

This excerpt reflects the colonial attitude and understanding of the world of political representatives, which view the land as a terra nullius, an empty, uninhabited land where the bare & desolate landscape turns into flourishing and thriving fields and pastures under the hands of European settlers. It is the land of wild animals, but the original inhabitants do not exist in this speech, their presence is erased and unacknowledged.

The background of this print is a digitally printed map of Manitoba from 1876, where I have highlighted the Mennonite land reserves, known as East Reserve around the Steinbach area, and West Reserve in the Winkler area, in red. A Métis family is pushed to the margins, while large looming figures representing settler families fill the space.

Several contemporary Mennonite scholars have wrestled with the settlement history, following paper trails of dispossession of Métis families in the East Reserve area, families that, after 20 years of legal battles, were finally granted land elsewhere. As Donovan Giesbrecht writes, “The struggles of these Métis claimants challenge the notion of an unoccupied prairie settled by Mennonite immigrants who were not intruding on others ...”

I did not find Indigenous perspectives printed in the Free Press regarding the settlement history of the province, but I chose a few texts from secondary sources, such as

Wahbung: Our Tomorrows, By the Indian Tribes of Manitoba, 1971, which states: “The terms of the treaties were unconscionable in that they did not ensure fair and equitable treatment to us and must rank in history as one of the outstanding swindles of all time ... The Indian people of that day could not possibly have anticipated the massive immigration of white settlers to this country ... The concept of private property was alien to Indian people.” 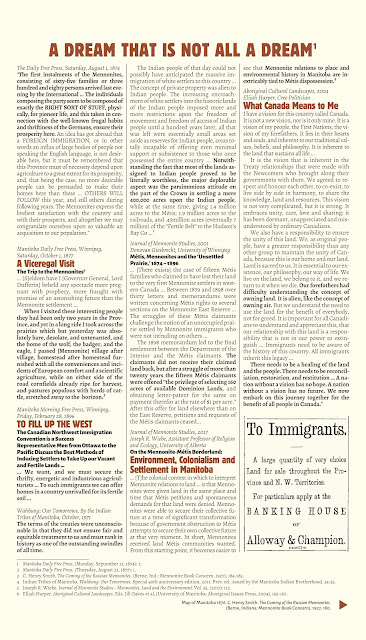 Posted by Miriam Rudolph at 4:37 PM