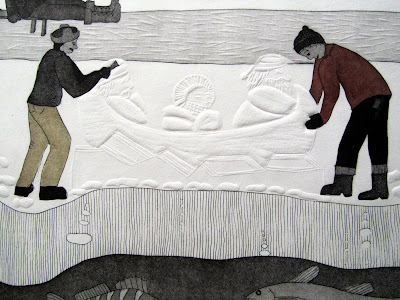 This is an update to the previous post. I exchanged the picture below with one where the embossment in the snow areas is actually visible. In this detail the two men in the foreground are carving a snow sculpture of a canoe with voyageurs in it. I thought it was a fitting sculpture for a print depicting the French part of Winnipeg. I based the sculpture on a photograph I found on the internet. Unfortunately I was unable to find the name of the sculptor.
Posted by Miriam Rudolph at 9:28 AM No comments: 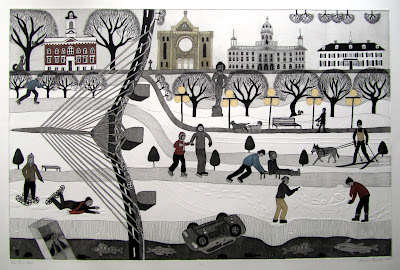 Red River Trail.
Etching, Blind Embossment, Hand Coloured.
55x85cm. 2011.
To not entirely despair while working on the zoo print, I had to start something new. The Red River Trail is an image I've had in my mind ever since I made the Assiniboine River Trail. The reason was that somebody pointed out to me that in the location of the current Louis Riel sculpture in front of the Manitoba legislature there was initially a different Louis Riel sculpture. Since it was a really controversial piece, displaying a politician in the nude, a bit distorted and abstracted, a new sculpture was commissioned and the old one moved to Saint Boniface. Check out the link if you want more information. Anyways, I always had this second image with the other Louis Riel sculpture as a parallel piece in mind (I did take the freedom to move the sculpture from behind the collége to the shores of the river). In addition, the Assiniboine River Trail was closed last winter dueto bad ice conditions and I spent some time on the Red River Trail, which gave me some new vantage points and new experiences to put in the piece. The car in the river was initially meant as a little toungue in cheek exaggeration since I put a bike in the previous river trail piece, but just after I printed my first proof last week, I came across an article in the Winnipeg Free Press where police pull out two vehicles from the river. That made me chuckle a bit. I really enjoyed working with the buildings of historic Saint Boniface. It's a part of town I haven't spent much time in, but these are the buildings I saw when I biked on the other side of the river or that stood out when I went down Provencher boulevard. During my last visit in Winnipeg a month ago I went for a walk through Saint Boniface to get some more close up inspiration for this print and it was lovely to walk through all the yellow fallen leaves, taking pictures and taking in the surroundings.
Posted by Miriam Rudolph at 6:17 AM 2 comments: 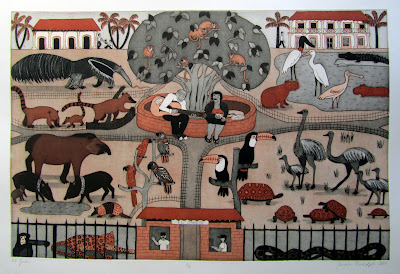 El Jardín.
Double-Plate Colour Etching.
40x60cm. 2011.
It has taken me ridiculously long to get the aquatints (the different etched tones) just right on this plate, but I'm finally almost where I want the piece to be. I'm still working on the plate, but I decided to post this proof already so you get to see something new on my blog. It took me weeks to perfect the aquatints again. Even though I'm completely familiar with the processes, a new studio with new materials just adds so many new variables that many things can go wrong. I've scraped large parts of my plate back to a smooth surface over and over and over again to re-etch them. First the aquatint grain was too coarse, then it etched with an odd pattern on the plate (grease streaks on the surface from the cleaning rags), then it etched too dark and now I can't decide where to stop with the editing and I decided to brighten the background a bit.
Posted by Miriam Rudolph at 5:56 AM No comments: