The Archives and the Newspaper 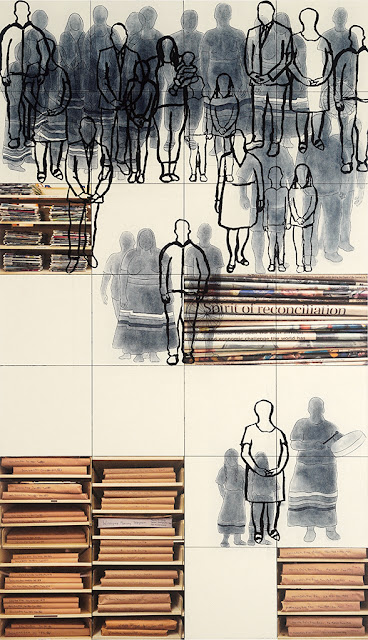 Print 1 - The Archives and the Newspaper

A season of historical reckoning

I begin with the archives and the newspaper itself – the starting point for this project. I visited the archives at the Legislative Library where physical copies of the early editions of the Manitoba – and Winnipeg Free Press are held. I have included some photos of the storage area in this print. The grid I'm using throughout the series also fits here as an organizational tool - to organize and categorize and store information and collective knowledge of history based on a euro-centric knowledge system. I populated the print with figures that signify settlers and Indigenous community members, because the access to our archives is public and part of our shared history, with all its inclusions and omissions of information, it is also a reclaiming of space and diverse voices. The Free Press claims in an advertisement from 2022, “The Winnipeg Free Press has faithfully recorded the evolution of our province and shared the stories of its readers for over 145 years. Discover your family's history as you search through newspaper pages dating back to 1874.” By including the ad in this context, I put this claim into question since there are so many angles and histories missing. While I, as a descendent of settlers, was able to find traces of my community's history dating back to 1874, I doubt a person with a BIPOC background might be able to say the same.

Archives and newspapers give us access to parts of our history, evidenced in the reporting, but also in the omissions in that same reporting. I am interested in the language and tone that is used in the reporting and how it has changed over the years, particularly in the way Indigenous and Métis people, as well as settlers, are represented. On the one hand, these representations are a reflection of the perception of racial differences in their time. On the other hand, they have played (and continue to play) a critical role in shaping public opinion.

To set up my narratives, I pull direct quotations from news stories dating as far back as 1874 and following their chronological trajectories to recent times. Each page then becomes its own self-contained summarized narrative representing various perspectives of each theme.

The format of the prints and layout of the text resembles the format of newspaper pages, highlighting the importance of the role newspapers play in shaping our narratives and perceptions. The inclusion of digitally printed maps, contemporary satellite imagery and grids represent the settler practices of land surveying, mapping, organizing, privatizing, and settlement, as well as the colonial imposition of a certain kind of order, of will, a way of life, and a way of thinking. 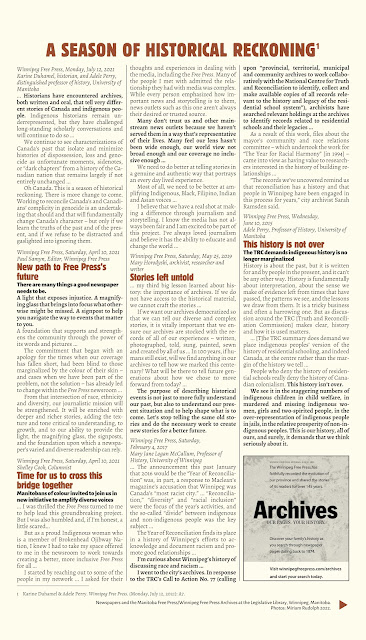 Posted by Miriam Rudolph at 4:18 PM