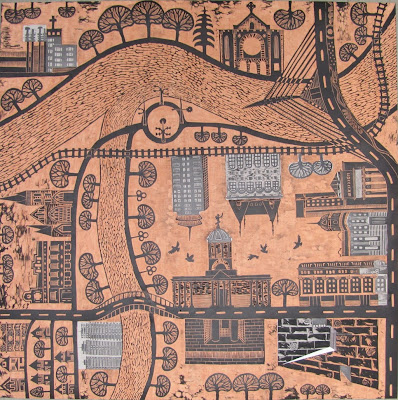 I was hoping to post a new print by now, but I'm still waiting on a delayed paper order, so no paper, no prints yet. Instead, I'll show you the plate I've been working on for the past few weeks. It's a fairly large linocut (24" x 24"). I've once again re-used a previous image I've done as an etching a few years back to re-interpret it in black and white on a larger scale. I have this wonderfully huge roll of flooring linoleum sitting around (6' x 8'), which I found really cheap at a thrift store a few months ago. Leftovers from construction I assume. I've been wanting to just cut a piece out and work on it for a while already and I finally did. I love this kind of linoleum. I used it at the university and at Martha Street Studio in Winnipeg, and having so much at my disposal suddenly made me salivate to do some block printing again, which I haven't done on this scale since the Steamroller Festival in 2010. The linoleum or the company that makes it is called Tarkett. It is a flooring vinyl with a high cork content and wonderful for carving. It is much softer than art linoleum or wood, but strong enough to hold up to large editions of more than 50 prints. Some people might want to mount it, but I never do. I just put a plexi-plate underneath to carry it around and slide it onto the press bed. The part I love best about this linoleum is that I can edit my plates. Imagine that, to edit a blockprint! I always edit my etchings, scraping, burnishing and re-etching, since a plate never turns out quite right the first time. With blockprints I tend to be very nervous getting only one try; if the tool slips or I've cut away too much in one area and the image looks off balance that's it, right? Wrong. I simply cut out the shape I want to replace and carve a new piece. You can see in the image below all the parts I replaced after proofing since I used leftover pieces of grey linoleum (the same kind and thickness as the orange...just a different colour). I simply use contact paper to adhere the pieces from the back and keep them in place. I don't know where the stuff is actually available, but perhaps a flooring company would know or even have offcuts.

Posted by Miriam Rudolph at 4:56 PM No comments: