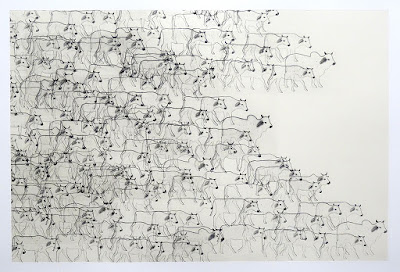 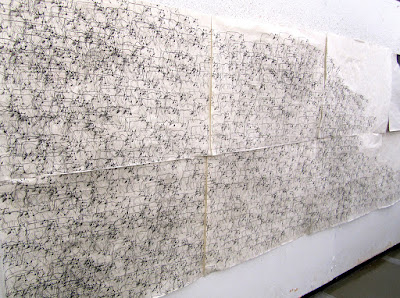 As a summer project (among other things) I decided to print this piece on a larger scale, initially starting with four paper panels. Six weeks later, the piece has grown to eight panels by now and might merge with another six panel piece. At some point my goal was to reach 800 cows to represent the 800 animals that are being slaughtered at the beef processing plant every day in my home community, largely for export. I didn't like the form of the herd at that stage and it wasn't working visually, so I scrapped that idea and kept printing. Six weeks later, I'm at over 1200 cows, having printed the plates more than fifty times already. I usually print one to three plates a day and then let the ink dry over night while working on other pieces. I'm not quite sure yet how I'll display this piece, but it'll probably be some kind of scroll or panel. I think I'm going to print some parts of this print a lot denser and then I'll let it rest to see where other projects take me.
Posted by Miriam Rudolph at 2:49 PM No comments: 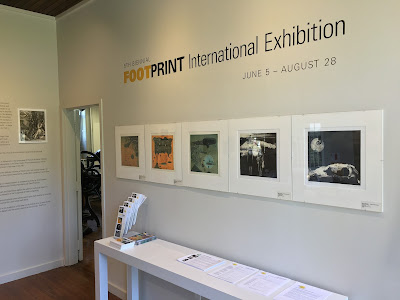 Here is a brief update about the 5th Footprint International Exhibition 2016 in Norwalk, Connecticut. The show is opening this Sunday and the gallery sent me a photo with my work on display along with the other winning artist Juha Tammenpää from Finland. I think the display looks great!
And here is a link to the exhibition catalogue. It's a really nice one and my two winning pieces are on page six.

Posted by Miriam Rudolph at 6:24 PM No comments: