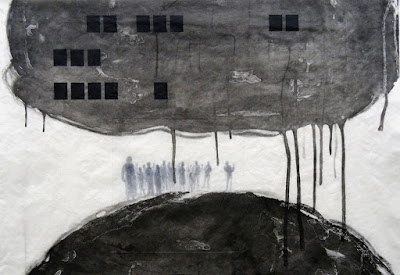 Here are a two of my more successful studies (one detail) that happened while printing my giant plate in various combinations. There will likely be more prints to come, but for now just these two to share what my 'playing process' looks like. 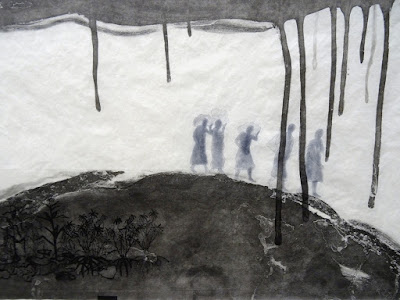 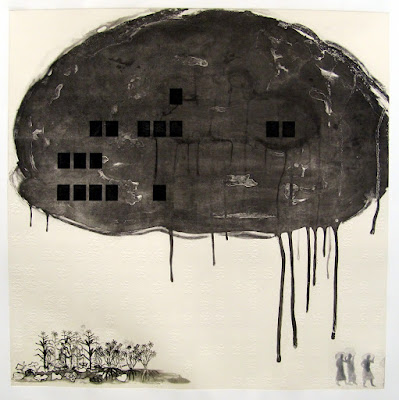 I have challenged myself once again with scale and I worked on a 3 x 3 foot sized copper plate for the past few months (90cm x 90cm). It was fun to work really loosely with the soap ground and spit bite on that scale. Erroneously I thought I would work rather fast with that method, and while parts of it did go fast, the handling, degreasing, etching, and inking of such a large plate and the challenges of printing it that come along, let alone dealing with oversized paper made me realize it wasn't just a quick sketch after all. Also I'm not entirely satisfied with the piece at this stage and that's why I still only have a proof and not a finished piece yet.
I think the piece is quite self-explanatory on many levels, but I do want to put it into context and share a few thoughts with you. I had just finished reading a book on Food Sovereignty (Food Sovereignty: Connecting Food, Nature & Community, edited by Annette Demarais, Nettie Wiebe, and Hannah Wittman...I can highly recommend it to anyone interested in food production) in connection with my research topic about the deforestation in Paraguay to make space for agricultural expansion. Food Sovereignty is a concept that wants peasants and their countries to take back the right to rely on and grow local food (see movements like La Vía Campesina). In some parts of Paraguay, for example, there are green deserts of soy plantations that continue to displace peasants and rural populations through land grabs. Rather than helping world hunger as the agribusinesses like to claim they do, international corporations grow soy for biofuels and fodder for meat production in the first world, but the product does not serve the population of Paraguay as a food source. It is solely used for export. Instead, the large scale agribusiness displaces many peasants from their land and they most often end up in the capital's slums without any access to growing food, increasing the world's hunger problem.
This is a greatly simplified version of a very complex issue. With my work I try to portray visually the crushing presence of the corporation and the displacement of the people. With a deeply etched copper plate of a screen printed mechanical soy plant pattern, I force the soy pattern onto the damp paper with a blind embossment (see detail below). I'm not sure yet if this is the final version of the piece, but this is more or less how I envisioned it. I still struggle between planning and experimenting more freely. Now that the plan is in place, it is time to experiment more. 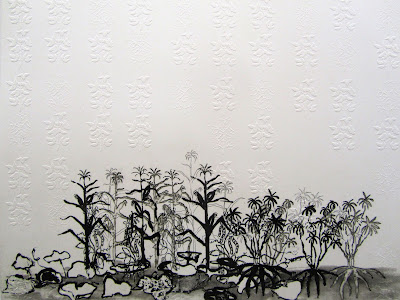 Posted by Miriam Rudolph at 7:34 PM No comments: 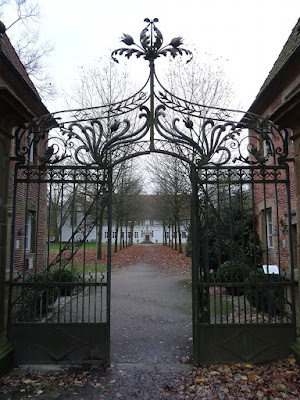 In mid November I had the opportunity to go to the 3rd International Printmaking Symposium at the Kloster Bentlage in Germany. Bentlage is a former monastery that is now cultural centre, art gallery and printmaking studio. I spent four highly interesting and pleasant days there, meeting many wonderful printmakers from around the world, showing my new work during an open portfolio, attending lectures, touring museums, art schools, and exhibitions. It was an amazing getaway in the middle of the semester, but my work production has suffered a bit, especially since I added two weeks of personal travel time to see family in Germany. But it was totally worth it! 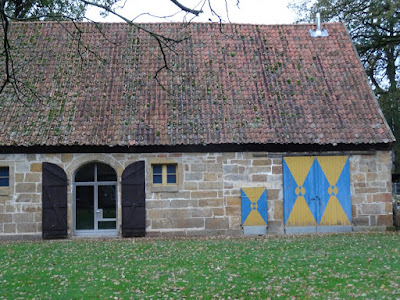 Posted by Miriam Rudolph at 7:03 PM No comments: