Here is a digital clipping of an article by Alan Small about the upcoming exhibition Headlines: The Art of the News Cycle at the Winnipeg Art Gallery. You can also access the article here (although it might be behind a paywall). I posted an excerpt pertaining to my work at the bottom.

Posted by Miriam Rudolph at 10:09 AM No comments: 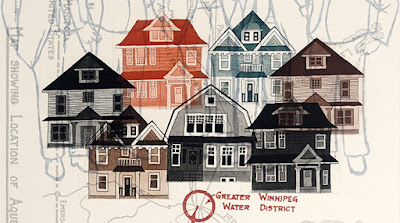 I would like to invite you to the opening of Headlines: The Art of the News Cycle, at the Winnipeg Art Gallery on December 2, 7-9pm (doors at 6pm) in celebration of the 150 anniversary of the Winnipeg Free Press.

I am over the moon excited to have a series of prints in this exhibition! I plan to attend the opening on Friday and hope to see some of you there.

Storied Land: (Re)Mapping Winnipeg is an artist's book exploring segments of the colonial and racial history of settlement in Manitoba and Winnipeg through the use of layered etchings that recall the diverging narratives of experiences. These histories have been sourced from local newspaper archives and from various accounts of Indigenous people, Métis people, and Mennonite settlers. This collection of prints and texts emerged as an invitation from the Winnipeg Art Gallery to create a series of prints for this exhibition. While I have mapped parts of the city in my artworks for more than a decade with a focus on landmarks and the neighbourhoods I commonly frequent as part of my search for connection and belonging, this project gave me the opportunity to learn more about the colonial history of Winnipeg. It also allowed me to further explore the colonial history of my own roots and challenge the settler narratives I grew up with. My maternal great great great grandparents were among the early Mennonite settlers that migrated to Manitoba between 1874-1877. They settled in the East and West Reserves on land granted to them by the Canadian government, but which had already been at least partially requested by local Métis residents.
Archives and newspapers give us access to parts of our history, evidenced in the reporting, but also in the omissions in that same reporting. I am interested in the language and tone that is used in the reporting and how it has changed over the years, particularly in the way Indigenous and Métis people, as well as settlers, are represented. On the one hand, these representations are a reflection of the perception of racial differences in their time. On the other hand, they have played (and continue to play) a critical role in shaping public opinion. This artist's book invites us to question our biases, our perceptions, and our understandings of history, and challenges us to decolonize our thinking.
Posted by Miriam Rudolph at 10:04 AM No comments: