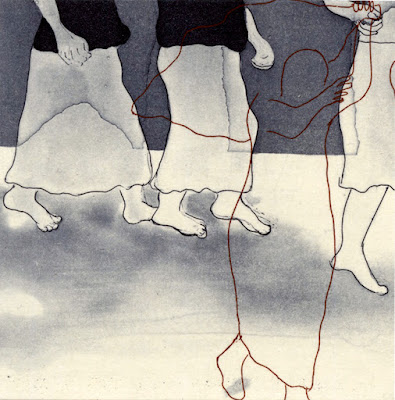 From large to small. Aside from working on the large cattle herd print this summer, I also worked on several other pieces. Among others was a small series of miniature prints measuring 7.5cm x 7.5cm. I'm thrilled to announce that Migration I (see above) was selected by juror David Kiehl, Curator of Prints at the Whitney Museum of American Art in New York for the 2nd New York International Miniature Print Exhibition at the Manhattan Graphics Center.

Additional Information:
This year, 222 artists from over 34 countries submitted work to the exhibition, bringing together a diverse representation of the print world today. Over 600 prints were reviewed by the juror. 123 will be exhibited. The 2nd New York International Miniature Print Exhibition will take place from November 4-December 18, 2016 at our printmaking studio’s gallery with an opening reception during IFPDA Print Week in New York, November 5, 2016.

There are two more pieces in the series that were not selected, but I want to post them here anyways. 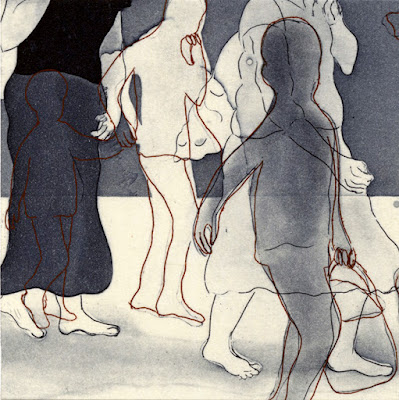 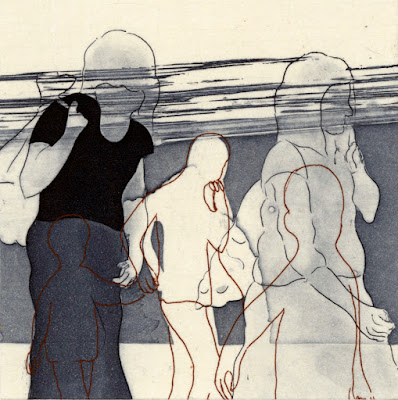 This piece was inspired by a satellite image from google earth that shows plumes of smoke rising from a cut down forest in the Paraguayan Chaco. To print the smoke cloud I etched three different smoke circles using first soap ground and then spit bite to get the different layers of delicately toned washes. I then cut the plates into wavy circles using tin snips and printed one or two a day slowly building up the layers and having to let them dry in the between. Working on this piece in conjunction with the cattle herd took me from April to September and eventually the two prints merged into one big piece (see previous post). 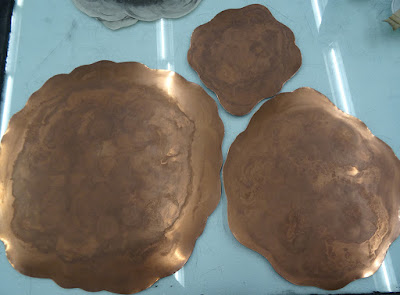 Cut copper plates that form the cloud when printed in layers.
Posted by Miriam Rudolph at 1:47 PM No comments:

I've kept my head down for the past few months and I have worked away on the cattle herd. The print has grown quite a bit more and it is almost finished now. I started working on a second piece with a smoke cloud from a deforestation site about the same size as the cattle herd and eventually the two pieces merged. Now I have a piece that measures about 6.5m in length. It doesn't show super well in a photograph, but I'm thrilled with the outcome of the print itself.
I've built the whole piece up by printing the same plates over and over again on a thin but sturdy Asian paper (Honen). The translucency of the paper allowed me to see the exact placement of each plate. I had two cattle plates that I printed about one hundred times. There are approximately 2400 cows in this pieces; that is about the amount of cattle that gets slaughtered every three days at the beef processing plant in my home town in Paraguay, mainly intended for export. Since business is going great, the demand to clear more forest for ever more pasture land keeps growing.

The overall piece consists of fourteen sheets of paper forming seven vertical panels that are hinged horizontally through the centre. Below is one panel that measures 125cm x 92cm. 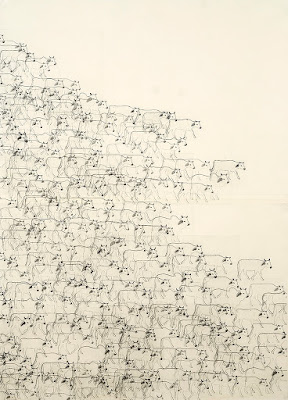 To hinge two sheets of the Asian paper, I wet each sheet and placed them face down onto a large sheet of acetate. I was able to slide the wet sheets around on the acetate until they lined up perfectly along the seam. I then carefully blotted the paper, which made it adhere to the acetate and stay in place. Using rice glue, I pasted a one inch strip of the same paper along the centre seam, hinging the two sheets together. 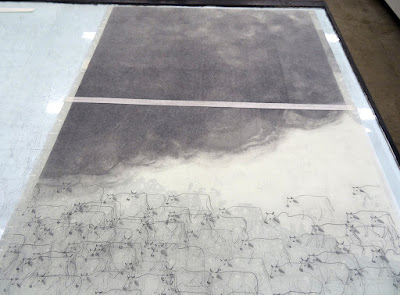 I let the hinged panels dry between drying boards over night, but after having some trouble with wrinkles in the paper due to different shrinkage rates, I decided to re-dampen the panels and tape them down to properly stretch them. This worked beautifully and by removing the tape very carefully, there was virtually no damage to the edges. 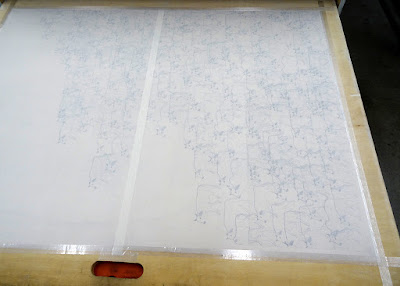 It's funny how working in a new studio can influence the way I work. When I first came to the UofA, I didn't like the Honen paper much and I hated taping down prints to flatten them. Now I love the Honen and can't imagine life without it anymore. I still hate the taping, but it's incredibly effective to get perfectly flat prints.
Posted by Miriam Rudolph at 6:55 PM No comments: