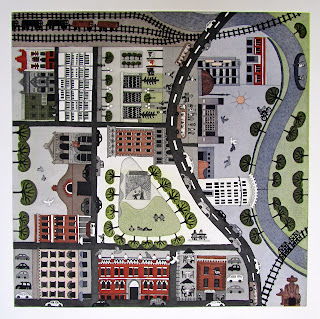 (I might still change the title and I'll probably post a better picture of the print, but I'm so excited to share this new piece that I'm posting it anyways).
Downtown Winnipeg is a part of the city I've been wanting to work with for such a long time and now that I've moved away a year ago it finally happened. I used to have a studio in the Exchange District for three years (just below the image's border in front of the central red building with the white trim) with a huge window and a great view of part of what you see in the print. I've also worked at Martha Street Studio (the red building in the top right corner) from 2007-2011. I always loved the 5 minute walk from the print studio to my studio, past the Manitoba Museum, the Concert Hall, City Hall, the Union Bank and Confederation buildings and the shortcut through the old market square. Unfortunately, nowadays the old market square is just a small triangle of green space tucked away behind buildings instead of being the center of the city where everyone gathers. I put the old market square into the center of my map and grouped the buildings around it, in a way referencing how historic cities were built around a central market square. I still don't love the award winning architectural cube that is the relatively new stage at old market square, but since it's there, it became part of this print. The metallic cube seems so stiff and sterile in an otherwise wonderfully dynamic area. I tried to portray parts of Winnipeg's beauties, but also it's not so beautiful sides, like the much debated rail tracks that divide the city, or Winnipeg's city hall (the building in the square with the flags) which appears so austere and uninspiring (I'm not a big fan of 60s architecture). Maybe some day I'll do a piece about Winnipeg's old city hall, a beautiful victorian building which was unfortunately demolished in the 60s to give way to the current city hall.
One question I get from every viewer is 'What is that thing in the bottom right corner?'. It's a new sculpture in Winnipeg at Portage & Main called 'North Watch' by Ivan Eyre. To be honest, I'm not sure what the artist's intention was with this piece, but to me it is some sort of winter god. For years I've been trying to find some Canadian mythological figure that represents winter, frost, the cold or something along those lines to incorporate in my work. The very solid, somewhat intimidating cyclop with his dog, sitting at one of the coldest and windiest intersections in all of Canada seems like a guardian against whatever cold stuff the winter will bring from the North.
Regarding technique in this piece, I once again I tried something new. I wiped the plates à la poupée, meaning that I use small cloth 'dolls' to wipe a plate in multiple colours (generally I wipe each plate with only one colour). I have one plate I wipe in green and red, and one that wipe half in black and half in a dark purplish blue. 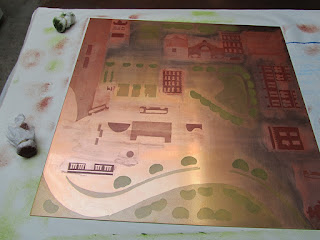 Wiping the plate à la poupée. You can see the little tarlatan dolls I used for each colour in small sections of the plate. 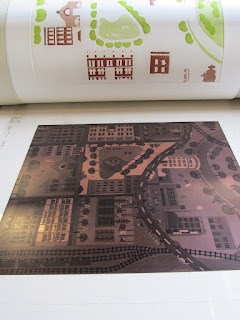 I'm about to print the second plate (black and blue) after the
first one. Since the black and the blue are quite similar in tone, I can wipe them side by side and let them bleed slightly into each other. On the red and green plate I need spaces between all the shapes to prevent the colours from mixing.