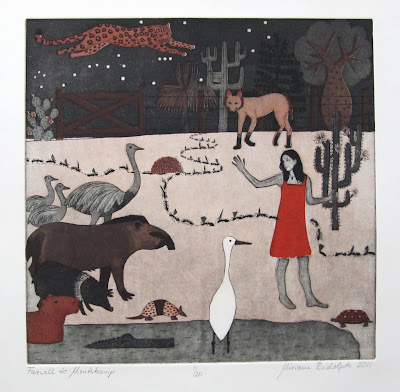 Farewell to Montekamp.
Double-Plate Colour Etching, Chine-Colle,
printed on Pescia Magnani paper.
30x30cm. 2011.
Farewell to Montekamp is the next print in the "footprint" series. Montekamp (German name for Campo Monte) is a small piece of land that my parents decided to sell last year. My dad used to do some hobby ranching which my uncle mostly took care of and since my uncle passed away a few years ago and we'd sold all the cattle my dad decided not to start up again. Somehow I was very very sad to let that little piece of land go from our family, although I wasn't there often and it is unlikely I will ever live in that region again. Somehow for me Montekamp is a place full of childhood memories and connections with wildlife. I remember seeing a Nandu family with sixteen little ones, I saw the shadow of a maned wolf sneak by once, there were always tapir tracks (it is such a prehistoric-looking, big and gentle animal), peccary tracks, capybara burrows by the water, glowing cayman eyes at night when you shone the flashlight across the pond, highways of ever industrious ants cutting down the grass and so on and so on. At Christmas time, which in the southern hemisphere falls into the middle of the hottest summer with temperatures of 40+ we would go to Montekamp to gather branches, palm leaves and cacti for our nativity scene and one year we cut down a big cactus for a christmas tree (we planted it later in our garden and for many years it blossomed beautifully). The stars and the Milky Way at Montekamp are amazing at Montekamp and dad loved to point out different constellations. Every once in a while we would go to Montekamp to spend the evening with my aunt and uncle swimming in the pond and cooking a stew or roasting some lamb over the open fire and my uncle would tell scary stories of jaguars roaming around his camp when he worked the land. For some reason I decided to put the jaguar from his stories into the sky, perhaps because it is only a creature of stories for me, perhaps because my uncle doesn't live anymore and perhaps also a little bit because of the jaguar image I have in my mind after reading El Rio by Wade Davis.
Posted by Miriam Rudolph at 4:35 PM No comments: 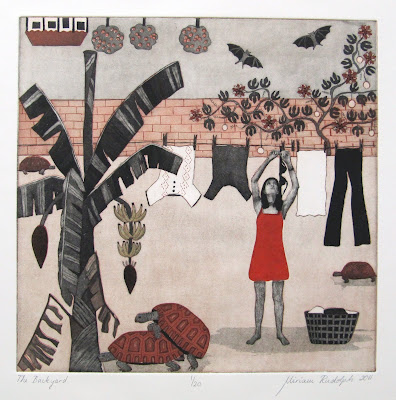 The Backyard.
Double-Plate Colour Etching, Chine-Colle, Hand Coloured,
printed on Pescia Magnani paper.
30x30cm. 2011.
For a while now I've been wanting to continue with the "footprint" series (see Holding On and Hibernation) and I finally got around to making another three prints of this series. This smaller square format works quite well for me to create more personal and intimate narratives of my experiences of places. The Backyard is exactly the image I have in my mind of a place where my parents lived for a year when I went back to Paraguay the first time to visit after having lived in Canada for one year. I was so so so homesick and going home was magical. I think in my mind Paraguay will always resemble paradise. My parents' backyard was entirely enclosed by brick walls behind which you could see only the neighbour's roof and some orange trees. Inside the backyard was a beautiful banana tree and a passion fruit vine (I absolutely love passion fruit and the blossoms are the most beautiful flowers in the world). The backyard was inhabited by four turtles and the two older and bigger ones had their daily routine of the male pursuing the female, slowly, step by step, until, after a few hours, the male finally reached the female and climbed her in a rather noisy and amusing mating ritual. At dusk I'd sit on the balcony and watch the bats zip through the air only distinguishable from little birds by their rapid flapping of wings. That's all...my parents' backyard.
Posted by Miriam Rudolph at 4:03 PM No comments:

I'm very excited about showing my work at Martha Street Studio. I guess this is really my first professional solo exhibition. And I got a few new pieces done just on time to go up on the wall.
Posted by Miriam Rudolph at 3:59 PM No comments: