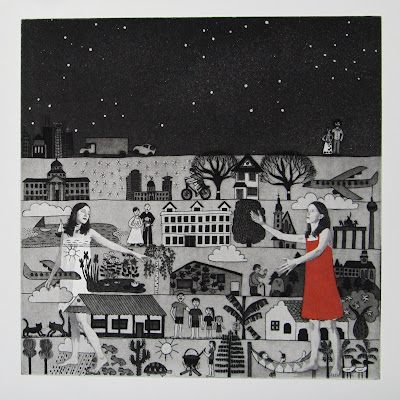 Leaving Behind.
Etching, Chine-Collé.
30cm30cm.
2012.
Do you know the feeling you get after travelling by airplane through multiple time zones, when you've been on one side of the world in the morning and you arrive on the other side in the evening? It always feels to me as if part of myself, or part of my soul has stayed behind and needs a little longer than the physical body to come along. In my most recent work I'm exploring different experiences about farewell, of holding on and letting go, of separations and longing, but also of new beginnings. In Leaving Behind I tried to portray the sense of leaving parts of myself behind in all the places where I've lived (Paraguay, Germany, Canada). To me that seems similar to the feeling I described earlier. Sometimes it appears that part of me is still there, in a place where I have spent part of my life, where I've shared experiences with others, and where I connected with a place, its vegetation, its animals, its climate. Part of myself remains in a place, but fades into the past as I go on. In a way I always reach out for that part of me that lives elsewhere and my mind is always in multiple places throughout the day, but I also know that the past remains in the past. I think the gesture of the figure of the present me in the piece is a little ambiguous; it could be either a plea to the other me to stay or a release of her into the past.
I have a few new pieces coming up in this series. The previous piece - Dreaming of a Garden - also connects with the theme of farewell in that it is a dream of new beginnings.
Posted by Miriam Rudolph at 2:15 PM No comments:

Dreaming of a Garden 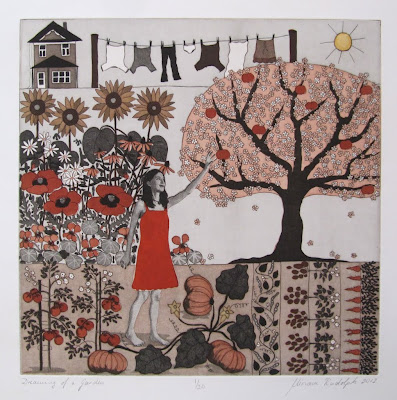 Dreaming of a Garden.
Double-Plate Colour Etching, Chine-Collé, Hand Coloured.
40cmx60cm.
2012.
What better thing to do in mid February than to dream of a garden? This image has been growing in my head for two years now and finally I've given it life on paper. As long as I can think I've wanted a garden and being a gardener would have been my second choice profession after becoming an artist. As a kid I used to plant and grow things all over the place, but since my nomadic student years in rented places, planting and growing things has mostly been a dream. Here in our apartment in Minneapolis there is no dirt around at all, only concrete. I think dreaming of a garden is more than simply wishing to be able to plant, grow and harvest. It is a very deep sitting desire to settle down and to put down roots. Well, for the next few years I'll have to content myself with being a nomad, but perhaps one day I'll put down roots somewhere and be able to grow my garden.
Posted by Miriam Rudolph at 7:24 AM 2 comments: