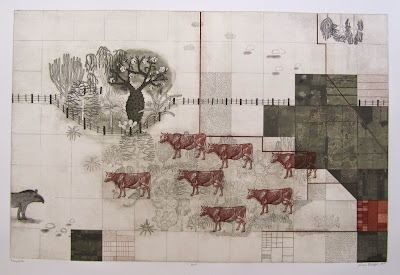 As a final piece this past semester I wanted to work on a larger plate. My advisor has encouraged me repeatedly to open up the spaces in my images more rather than making my images quite so dense. Working on a larger scale again (24" x 36") allowed me to do just that, although it was quite difficult for me to know where to stop adding things. I also wanted to see if it works for my imagery to be combined with some digitally printed satellite images, which I collage into the piece. I printed the plate(s) in various stages, using some of the visual vocabulary I had tried out on the smaller plate before (see below).
In Transposition I, I etched a whole section of forest into the plate with the intention of scraping it away again. Before scraping it, I used the cow cut-outs again to remove part of the forest imagery (Transposition II and III) and in the final piece (see Transposition IV above) I added a second red plate to illustrate the expansion of ranch land and the beef production, with the intact forest being fenced in, protected in a a few limited nature reserves. 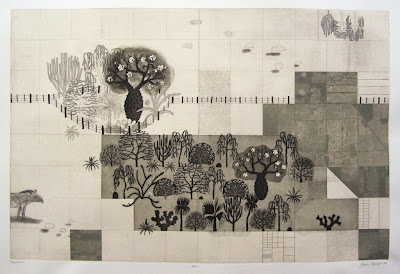 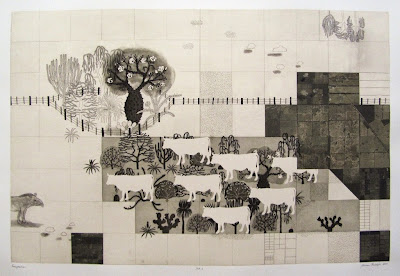 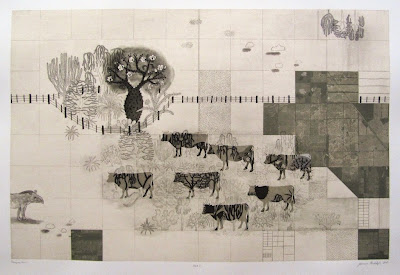 Posted by Miriam Rudolph at 2:30 PM No comments: 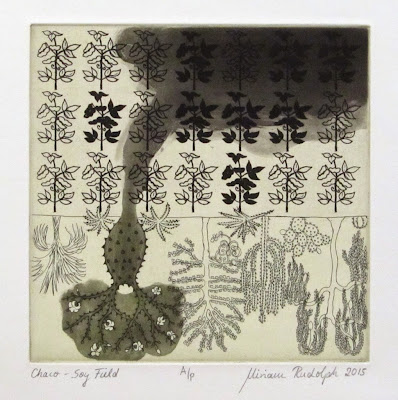 I had signed up to make a small portfolio exchange print and since most of my work this semester revolved around cattle ranching, I decided to explore the direction of soy plantations a bit since, which is growing rapidly in the Chaco. I turned the forest upside down and juxtaposed the finely drawn, individual trees and cacti with the uniform and repetitive soy plants. Unlike much of the cattle ranching which (at least partially) benefits local ranchers, it appears most of the soy plantations are in the possession of foreign investors, which use the land and funnel the profits out. However, I need to do more research on this issue before I can make broad claims.
Posted by Miriam Rudolph at 4:37 AM No comments: 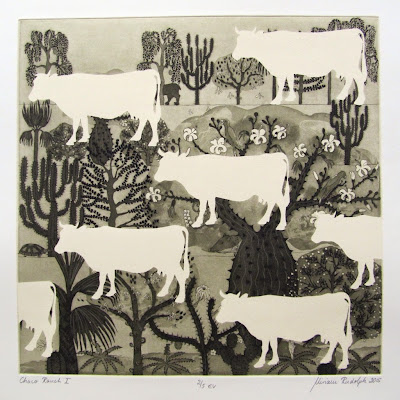 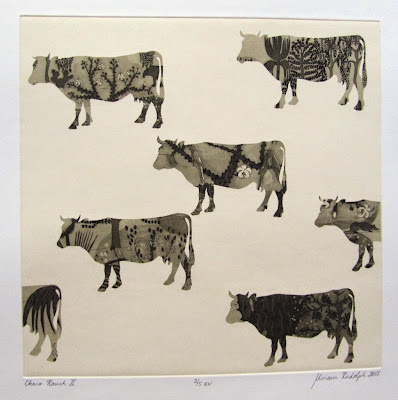 Posted by Miriam Rudolph at 4:32 AM No comments:

One of the first exercises I gave myself during my second semester was to make a small copper plate that I could alter through various editing processes. Since one of my key topics is the disappearance of the dry forest, I started with a drawing, or rather etching, of a typical Chaco forest (Chaco I). 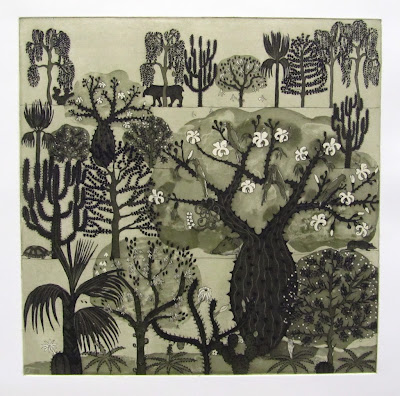 For the second stage I rigorously scraped the plate to re-create the changes in the landscape on my plate with the forest slowly disappearing. Despite my rigorous scraping, the image still looked rather neat (see center left part of Chaco II). I've always wanted to try an open bite on a plate and here was my chance, hoping the open bit would attack the plate more rigorously than my scraping did. I stopped out the middle part of the plate so it wouldn't be affected by the acid. For the open bite, I simply put the plate in the acid without any aquatint on it, so the acid just etched away the surface. I left the plate in for about an hour. The result was quite different from what I expected. a) it was much cleaner than I had anticipated, and b) I hadn't cleaned my lines very well it seems, so the ink or grease residue worked as a resist in the acid while it bit all around the lines. The lines were quite raised in the end, almost like a high relief collagraph and I ended up scraping them down a bit. Another interesting thing happened: the plate showed a vertical linear dripping pattern on the surface of the plate. I etched the plate in a vertical tank and apparently the trickling down of tiny copper particles during the etching process somehow worked as a resist and resulted in an uneven surface etch. 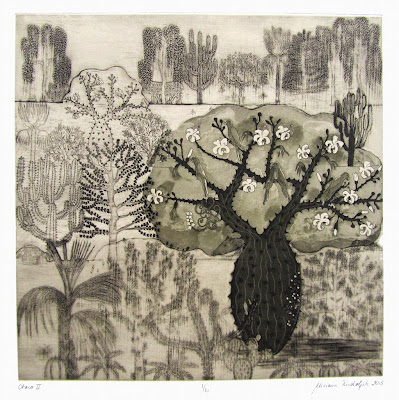 For the third stage I drew a grid over the whole image. I did a stage-bite aquatint to recreate the land surveillance process and to imitate the aerial views/satellite images of the area after the forest has been cut for ranching. I don't think the third plate is quite resolved yet. It's a bit too blocky I find. Maybe I'll tackle it again in the future to fine-tune it a bit more, or I may just leave it as an exercise. I do like the interplay between the layers of the plate, between what was before and what is now. 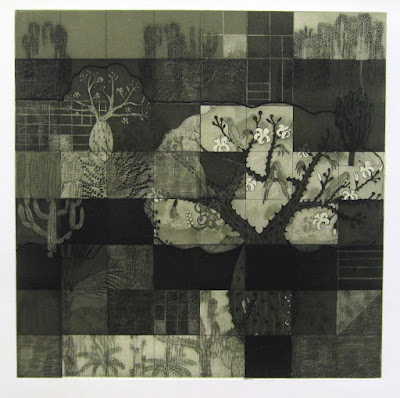 
Posted by Miriam Rudolph at 7:13 AM No comments:

Well, it is time I introduce my new work from this past semester. It is a tricky and very complex topic I'm trying to tackle while at the same time exploring new ways to make and compose my imagery. The topic I have chosen for my possible thesis topic is about the changing landscapes in the Paraguayan Chaco, my former home as most of you probably know. The region with its dry forests is changing rapidly due to an economic boom in beef production and also an expansion of soy plantations. Over the past few years I've repeatedly come across articles in reputable newspapers such as the New York Times and The Guardian which focus on the rampant deforestation happening in and around my home community. It's a topic that I've been wanting to address in some way or other for a while, and I believe grad school might be right place to try out some more political work away from the pressures of gallery markets (as much as I love those settings as a working artist and which I hope to return to again eventually). I am greatly concerned with the environmental impact the economic boom in the Chaco has on the region, but at the same time I also see the improved life styles of many of the people in the Mennonite community where I grew up. I'm not entirely sure yet where all of my investigations will take me and my work, but I'm hoping to create some dialogue about issues of deforestation and economic growth, sustainable farming, and possibly land rights for the indigenous communities who are also affected by the economic boom. I am currently in Paraguay to conduct some research and I'll try to write an entry towards the end of the month with some reflections. (I apologize for the long break in posting and now the sudden deluge, but my second semester of my MFA was so stressful I didn't manage to keep up with my blog. I hope that'll be different again in the future now that I'm finished with all my coursework. The remainder of my time at the University of Alberta I will mainly dedicate to making art).
Posted by Miriam Rudolph at 7:12 AM No comments: