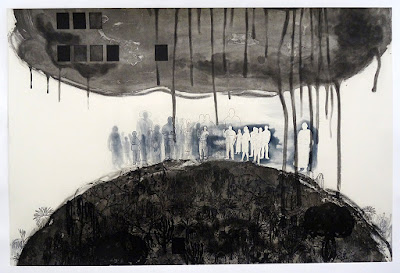 How do I write about a piece on my blog when I don't know exactly what it represents? My advisors keep telling me to not overthink things, to work more intuitively and to trust that meaning will emerge in the finished piece. I'm not sure if the title for the piece is final. All I know is that there is something dark and ominous looming over an intact world (the dark cloud was initially intended to symbolize corporate power in an earlier piece). I'm not sure if the figures are still part of that world, or if they've disappeared already. Anyways, that's all I'm going to say about the content at this point and let you think about it for yourself.
I finally finished this print this week. I had a proof done for months already, but it took me forever to print a good print in a small edition (I only finished one so far). I re-worked some plates, which I kept putting off and for some reason it was so incredibly difficult to print the spit bites smoothly. It also took forever to print, since there are nineteen plates (a lot of them 30cm x 30cm), and with most layers I waited at least 24 hours before printing the next. So, my daily routine for the past few months has been to print a few plates on various prints, hope that I won't mess up half way through and continue the next day. More to come soon.
Posted by Miriam Rudolph at 4:10 PM No comments: 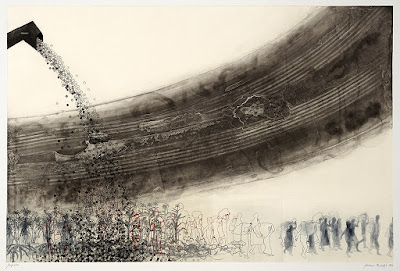 The prints I started in January are finally coming together and one by one I'm finishing them now. I wanted to be done months ago, but the printing process I'm working with now is slower than ever and sometimes I feel a bit like a hamster in a wheel: I work and work at the studio but it feels like I'm not really getting anywhere. Well, I hope the next few posts will prove this feeling wrong.
I've started utilizing my printing plates almost as drawing tools, where I print smaller plates (most of my plates are 30cm x 30cm) relatively loosely on a large sheet of Asian paper. Some of plate marks remain visible in the final pieces, but I don't really mind that part of the process is visible.
Migration is a 15-plate print, which means I often print one plate which I then need to let dry for a day before I continue (sometimes I print a few when I don't mind loosing some wet ink through offset). I continued playing with some of the cloud imagery I started with earlier. In this piece, the ominous swopping cloud was inspired by the toxic clouds of crop dusters. I've been researching the soy industry and soy plantations in Paraguay and there are so many accounts where soy fields surround small villages and peasant farms. Often the crop dusters will spray villages, in a few instances even children on their way home from school, or the crops of subsistence farmers which then wilt and die from the herbicides. Inequality is a really big issue in Paraguay, mostly tied to land ownership, and more and more peasants are displaced by large agribusiness enterprises. While these big companies claim that their way of farming is necessary to combat world hunger, in reality it contributes to world hunger since almost the entire crops are exported to other first world countries as feed for meat production, while local subsistence farmers are being displaced and migrate to the slums of the bigger cities where they can't grow their own food. Well, these are some of the issues I tried to portray in this piece, by printing some of the traditional subsistence crops on the back side of the Asian paper to shine faintly through and to create a physical separation between the plants and the figures, and with a torrent of soy beans falling from a harvest-combine spout onto the gardens and people, displacing them (see detail below). 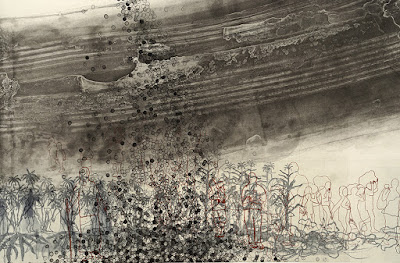 Posted by Miriam Rudolph at 10:06 AM No comments: 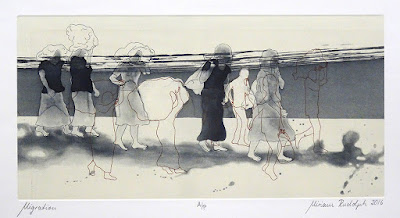 Since I started graduate school, my posts have become so sporadic. Some day when life will normalize again, I hope to pick up blogging more regularly again. Until then, please bear with me.
This study is a small print I made a for an exchange portfolio with fellow printmaking students and faculty here at the University of Alberta. It was a plate I etched a while back. It didn't quite work for what I had intended it and at some point that plate had slipped into the acid bath without being fully stopped out, creating that strange band of open bite across the figures. There was something interesting about it, so months later I reworked the plate, scraping some parts, and re-etching others. I played quite a bit with spit-bite to get the washy effects and later I added the second plate with the red line drawings. In the end I had a nice little piece that I was quite happy with.
Posted by Miriam Rudolph at 9:18 AM No comments: