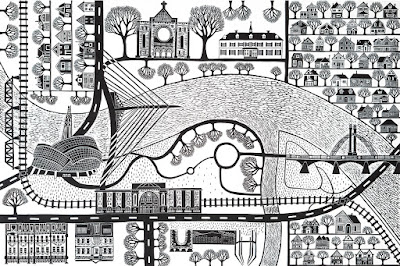 My Winnipeg VI is finally finished. I'm happy I finally got there, considering I started working on the drawing in March or April I think, when M. was still super little. I'm happy how the linocut turned out. This is the first time I combine downtown landmarks with some of the Winnipeg neighbourhood imagery typical for my work. Since I've started using some micro carving tools of 1.5mm, I can carve much finer detail which I enjoy a lot.

Here is an (edited) excerpt from an earlier post about the imagery in the print: Some of my favourite parts of the city are right at its centre where the Red River and the Assiniboine River fork, the extensive walkways in the area and the surrounding landmarks and neighbourhoods that give this city so much of its character. While I've depicted parts of downtown and Saint Boniface in previous prints, I've been meaning to make work that includes the relatively new Museum of Human Rights, the Upper Fort Garry Park, and Union Station. Also depicted are the Fortune Block and The Winnipeg Hotel.

Posted by Miriam Rudolph at 9:46 AM