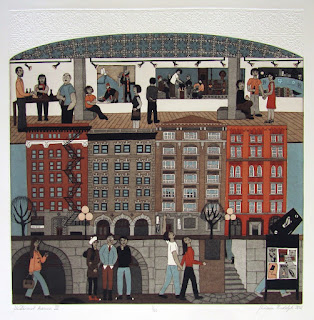 
This last piece in the McDermot Avenue series is the street block between King Street and Princess Street. There are multiple galleries and artists' studios in this block, such as Outworks Gallery, Ace Art, Urban Shaman, RAW, etc. There used to be others, but several have been vacated due to increased rental prices. Each one of the three prints in the McDermot Avenue series shows the interior of a part of the art community of the Exchange District: a frameshop, a studio, and a gallery. In the upper part of this print there is an exhibition opening in full swing with people looking at art, talking, nibbling on some crackers with cheese, and drinking some wine and beer. The gallery space in my print was inspired by Outworks Gallery, an artist run gallery and studio. It is one of my favourite gallery spaces in town and I had my graduation exhibition there in 2007. The lighswitch on the bottom right is part of a  poster board and also the logo (designed by artist Michael Carroll ) of 'IT'S ON - FIRST FRIDAYS WINNIPEG', an art event that happens every first Friday of the month where artists and galleries open their studios and doors to the public. The ceiling in this piece is imaginary since there is no such pretty ceiling in this old warehouse space. I used the pattern of an old ceiling tile that a friend of mine had in her studio. Below is a close-up of the embossing again. 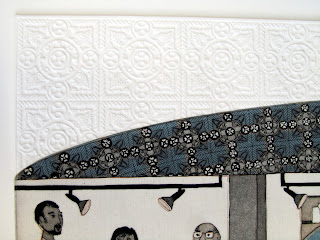