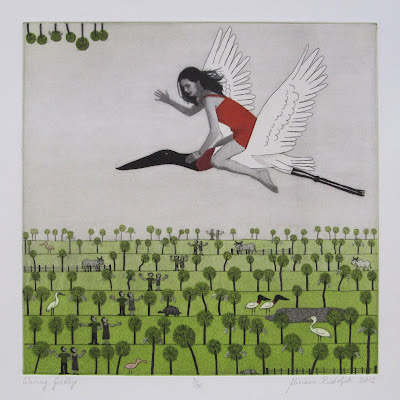 
For now this is the last piece in the Farewell series. In my family it is tradition to wave until we disppear from each other's view. I wanted to portray this waving goodbye and growing smaller and smaller as the distance grows. For this particular piece I remembered my parents standing on the airport platform waving as my airplane took off last time I was in Paraguay. But, since airport platforms and airplanes with little windows are kind of boring, I wanted to do depict more the spirit of leaving my country and my parents behind. I'm trying to figure out why this piece turned out so whimsical and almost happy, since I was (unsuccessfully) aiming at a more somber piece. Perhaps it is because my memories of Paraguay in general are happy memories, so every time I portray Paraguay, it is in a cheery and beautiful way. Perhaps it is because I feel fine with my current life in North America and I see myself as being off to new beginnings in the print, which outweighs the growing distance I intended to portray. Sometimes I have the feeling my art has a life of its own and I, the artist, have fairly little control over it.

The bird in the print is a Jabiru, a stork-like bird in Paraguay that is strikingly beautiful (despite its bare head) with its red band around the neck. I believe there is also a small airplane called Jabiru, so I thought I'm not that far off when I exchange one for the other.
Posted by Miriam Rudolph at 2:04 PM